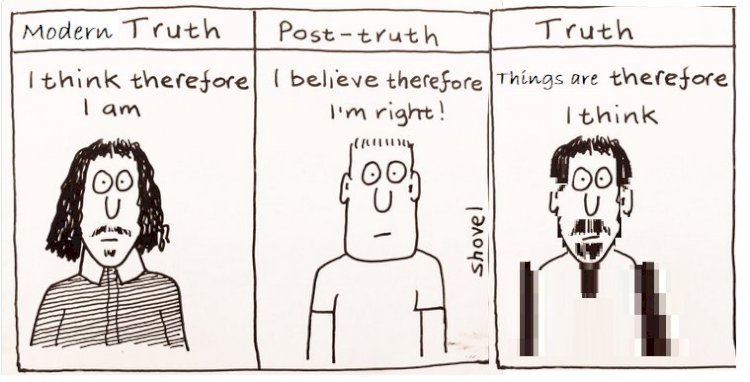 Universally, a toxic swift is palpably clear in international politics to xenophobic, populist majoritarian right. From Trump, Brexit and Jair Bolsonaro and Recep Tayyib Erdogan the trend is undeniably precise with more countries hobnobbing to the tally. As the ‘neo-colonial Globalization is tottering to fall on account of its perceived cultural and commercial exclusion od developing countries, new political structure is on the rise. Instead of multicultural tolerance, gender neutrality and green economics, the new political structure is spirited from apathy towards migrants, gender discrimination and ‘othering’ of color. Post-Truth sub structure animates this political metamorphosis.

When and how did we get to this post-Truth conundrum, and what exactly does it mean?

Post-Truth is not merely all about ‘fake news’ through media, whether corporate or social. Moreover, it is a sinister ‘unacademic’ and compound ignorant wail of ‘hitherto marginalized majoritarian sections’ about alternative reality. Intelligence and informed opinions are superseded by clumsy emotions and hollow rhetoric.

Truths are perceived not on the pedestal of learned decisions but individual understanding becomes the fulcrum to manufacture alternate reality. Wide currency for social media, un-traceability of messages in encrypted messaging apps, profit-oriented media enterprises and the increasing ‘social media ghettoisation’ of communities propels the growth of Post-Truth reality. It is being fed inadvertently into the people who are increasingly reliant upon social media for all purposes.

It is a truism—or a ‘post-truism’ if you will—that the internet has played a central role in the creation of the post-truth world. The dogged insistence of President Donald Trump’s supporters in believing information encountered online as the gospel truth, the role of fake news engendered for and circulated on the internet, especially via Facebook, in the run-up to the US elections, and the use of Twitter to whip up and legitimize dubious stories—all are testimony to the political power of the internet. Indeed, the epidemic of fake news has become a global malaise, seen in both developed and developing countries.

And India is not an exception to universal phenomena. Although opinion is fragmented as to which extent India has been into the Post-Truth age, a rare universal concurrency is evident that the populist nature of post-liberal Indian politics is a major catalyst for the convergence of Post-Truth reality. Growing clout of extremist ideologies among various religious communities of India asserts this fact. Hindu right wing is energized due to ‘Big Lies’ of historical subjugation and muscular leadership of a leader allegedly stained with the bloodstains of minorities and corporate funding whereas Muslim right wing is natural fallout is increasing threat for existence and the crumbling faith in the state.

As discussed by Rajdeep Sardesai, Modi’s catapult to Delhi, the first ‘Hindu Samrat’ to do so after Prithiraj Chauhan, was indeed upon manufacturing of new romanticized vision of New India where Nehruvian liberalism and socialism are forsaken, religious consolidation of Hindu majorities and quixotic economic sops. Modi promised a New India where ‘elites’ are reined, money embezzled in foreign countries are distributed and closure of minority appeasement.

Swati Chaturvedi in her book has documented the role of social media in the electoral success of BJP post-2014 general election. RSS’s and sister organization’s efforts to ‘purify Akhand Bharat’ have born fruits as seen in the strings of the electoral triumph of BJP. BJP was able to cleanse their hands in the plight of people after Demonetization as the party machinery was hugely successful in selling to the people impassively milling in front of banks to exchange hard-earned money that your tears are the bullets to fight corruption, to tame stone pelters of Kashmir and vanquish Maoist terrorism.

As a corollary, other communities of India have also turned more fanatical and ‘separatist, in cultural and political orientation. Electoral wins by Asaduddin Owaisi in Maharashtra and Bihar tells the same story. Infiltration of Khalistan elements in farmer protests is the flip side of growing malaises of Post-Truth vices.

This inward-looking turn with excess religious orientation is sure dolomite for the destruction of national integration. Electorates are to be careful not to fall for the baits of populist leaders. Self-discipline is a must to not get overwhelmed in the deluge of Post-Truth lies.