A total of 1000 madrassa teachers will be trained under the joint venture by the Maulana Azad National Urdu University (MANUU) and the United Nations Population Fund (UNFPA). The initiative, according to information, given by MANUU, is aimed at empowering Bihar madrassas by helping students to acquire scientific, technical and social skills. And it mplements the concept of progressive and sustainable change in madrassas through alternative teaching methods under the is implemented under the Adolescent Education Programme (AEP) of UNFPA.

Started on November 18, the seven-day state-level training programme has come to an in Patna. The training programme was conducted to train 48 master trainers and facilitators who will train an additional 1000 madrassa teachers. AEP is being implemented in all madrassas in Bihar under the leadership of Bihar State Madrassa Education Board.  The programme focuses on empowering young students, enhancing their abilities and making them responsible citizens.

40 madrassas will function as resource and technical centres for student training, mentoring and creative expression.

Dr Muhammad Nadeem Noor, head of the UNFPA in Bihar, said the training programme was the second largest for Muslims by professionals after polio vaccination.

Jamia Millia Islamia and the Bihar State Madrasa Board are the other partners in the programme.  More than 84 master trainers and facilitators from 12 districts of Bihar attended the programme. 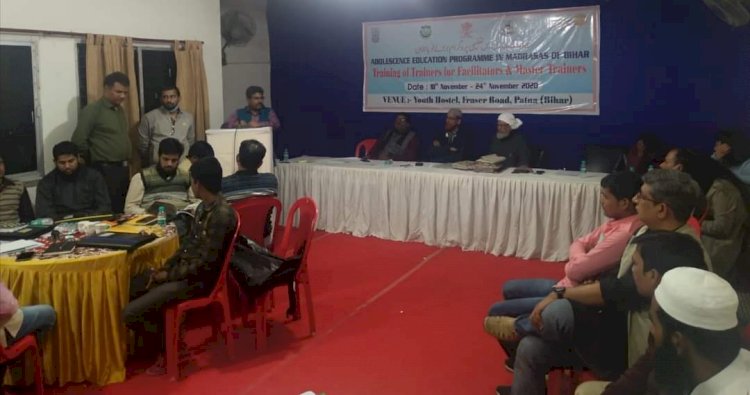 According to the details published by MANUU, AEP aims at the training, capacity building and lifelong learning of adolescents studying at Wastania level (classes 6-8) Madrasas. The project endeavors to reach all the Wastania level Madrasas in Purnia division of Bihar.
MANUU is responsible for training of nodal teachers, supportive supervision; implementation research and developing alliance network for community sensitisation.

The pilot project was launched last year in two districts of Purnia and Katihar and Bihar government decided to expand AEP to the entire state after it evoked good response during pilot period. The training for master trainers and facilitators is on at the Youth Hostel in Patna.

Project Director, Prof. Muhammad Shahid requested all the trainers to work diligently and honestly in their field.  He explained that such training would be continued in the future to ensure effective implementation of the program.

Abdul Qayyum Ansari, Chairman, Bihar State Madrasa Board earlier noted that AEP is an ideal programme that will pave the way for the young generation to develop critical thinking and become responsible citizens. The programme will also help them to adapt to modern requirements.

Muhammad Israr Alam presented the report of the training program and conducted the proceedings.