Kerala government’s decision to implement ten per cent reservation for Economically Weaker Sections (EWS) among the forward classes has stirred up a political storm. The move by the LDF government has been criticised as caste appeasement and subversion of constitutional justice. As the Panchayat election is around the corner, the issue has snowballed into a huge controversy.

First implemented in Dewassom appointments, Kerala government announced forward castes reservation early in the year. All decks are cleared for its implementation after the Kerala Public Service Commission officially notified its approval on 23, October. Hitherto uncovered sections from Hindus and Christians would be eligible for reservation based on their relative economic backwardness.

LDF government hopes to win over upper-caste Hindu voters who deserted the party over Sabarimala temple entry controversy. Besides, the move coming on the heels of the defection of Kerala Congress, Mani faction, to LDF is expected to cut into congress’ bastion among Christians. This has angered ST and OBC sections who traditionally support the party.

BJP has wholeheartedly welcomed the move. It demands the economic criteria should be changed and reverted to central guidelines. But Bharat Dharma Jana Sena (BDJS), a major constituent in the NDA in Kerala, has publicly denounced the decision and plans a state-wide protest. Sree Narayana Dharma Paripalana Yogam (SNDP), the parent organization of BDJS, is composed of OBC Ezhavas. This exposes chinks in the armours of NDA in the run-up to the election. 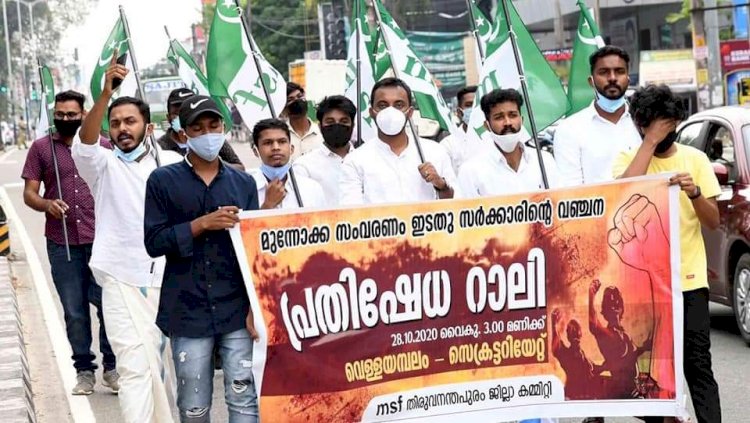 “Among all political parties, Congress is at a tight spot over the issue. While major sections of Congress support the move but are fearful of losing OBC and Muslim votes. Moreover, Indian Union Muslim League (IUML), an ally of UPA, has staunchly opposed the move and plans to fight the issues both legally and politically” says political analyst Jaishankar. Many congress leaders like Ramesh Chennithala and Muraladheeran have publicly endorsed the decision and do not like to see LDF and BJP making inroads to the upper caste vote bank. KPCC president is to convene a special meeting to discuss the issue and chart out the future course of action.

IUML is at the forefront of agitation asking the government to drop the reservation and rectify mistakes in the current reservation system. The party had also voted against the bill when it was brought in parliament by the central government. “The party is against the move because it seeks to undermine the reservation process of the constitution. By making reservation a poverty alleviation poll gimmick, LDF is trying to emulate RSS’ antagonism against caste-based reservation” said E.T Muhammed Basheer, M.P from Ponnani constituency.

“By bringing such a Bill, the government is trying to communalise the issue. IUML’s stand is being depicted as communal so that LDF hopes to consolidate Hindu votes,” said convenor of Joint Protest Forum Kutty Ahmed Kutty. Joint Protest Forum is an umbrella movement by IUML to oppose the move along with all like-minded organisations. He clarified the TheSite that the decision to oppose is purely constitutional and deplored all attempts to give it communal tinge.

Samastha Kerala Ja’myathul Ulama, an important body of religious scholars in Kerala is also of the same view. Its president Jifri Muthukoya Thangal emphasised the criticism as politically motivated and wanted assurance from the government that the latest changes in the reservation will not eat into the already reserved fifty per cent of reservation.

“Although the government justifies the move to ensure social justice, it indeed is aimed to reap electoral gains in the coming elections,” said Sunny M Kappikkad to TheSite. “Historically left parties are at loggerheads with caste reservation enshrined in the constitution. By the new reservation gimmick, left parties are competing with BJP to appease upper castes, he added.

Unfazed by criticism, the government is hopeful of getting political mileage through the move. People belonging to the reserved category are apprehensive of losing their dues in the politics of appeasement. This controversy will have a huge impact on the prospects of political parties in the coming Panchayat and legislative elections.