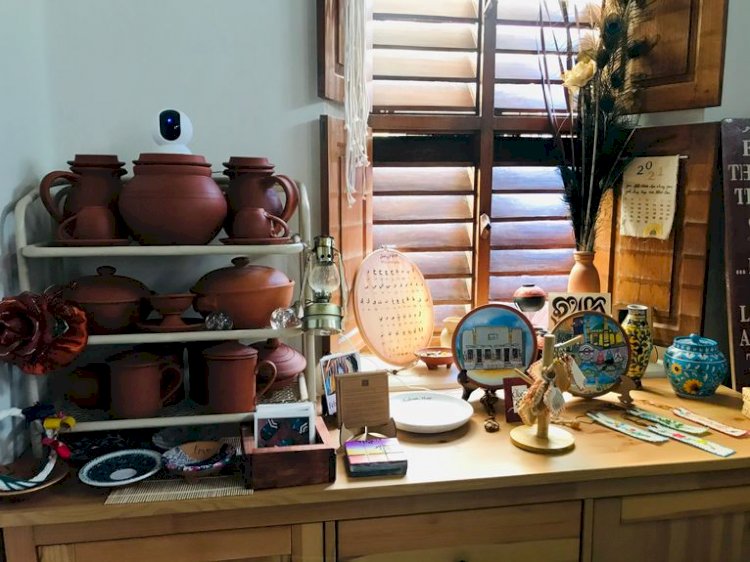 An eco-friendly heritage handicrafts shop with a focus on community empowerment is Abati. Kayalpattinam’s heritage and culture are preserved here in the form of beautiful artefacts. MUHAMMED NOUSHAD visits the space and narrates its story.

A small wooden board, written ‘Abati’ on it, hangs on the outer wall of an ancestral house on Thaika street in Kayalpattinam. Inside the traditionally designed house, a unique world of artefacts and handicrafts, all representing the town’s heritage in diverse ways, waits for you. It is a surprise that such a pleasing treasure is kept hidden from the street view, whereas Kayalpattinam’s rich Tamil Muslim heritage that has been shaped by centuries-old maritime trade has multiple manifestations in the form of beautiful objects inside.

Sathakathun Jariya, whose youthful vision and hard work have made this impressive collection possible, welcomes you to take through the exhibits: traditional baskets, cloth bags including vattuvams (traditional fabric wallet bags used by aged women), lovable flower pots, theme-based key chains, meticulously handcrafted bags, antique tools, embroidery of Arabu-Tamil alphabet, terracotta plates painted with Kayalpattinam’s landmark images and lot more. Apparently, the best place to buy a souvenir of the historic town: a cultural museum in action. Jariya smilingly reminds you that Abati is still a workspace, not yet a fully-fledged shop. 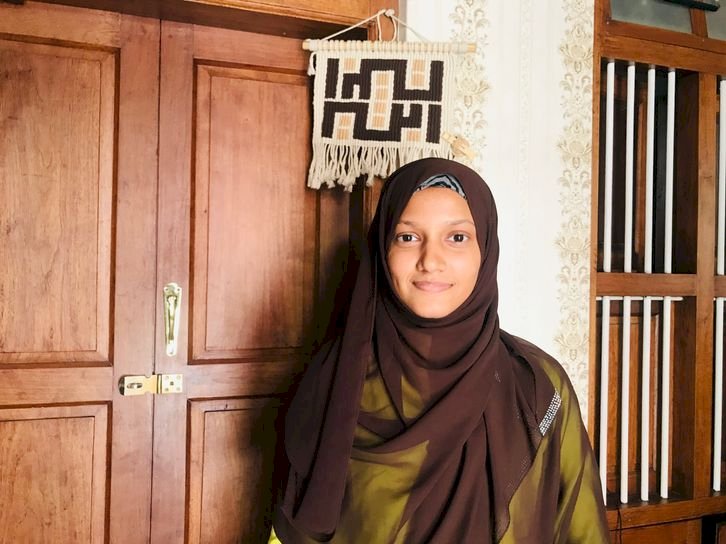 Abati manages most of its sales through its Instagram page. However, for Jariya, Abati is more a community empowerment centre than a commercial space. As it was recently registered as an NGO, she envisions locating talents, sharing resources and giving training. Despite the pressures of the pandemic, she has been consistently organizing workshops for the artistically talented girls in the town.

Abati had its humble beginning in 2016, as Jariya set up a small stall at the Kanthuri (death anniversary celebrations) of Sahib Appa, one of the many Sufis buried in Kayalpattinam. And there was no turning back. Abati often buys traditional products and modifies them, adding more aesthetic value to it. It is evident that the store does a lot of creative upcycling and recycling. Eco-friendliness is a key-value, as the idea of handicrafts at Abati is not about glossy objects adored with fetishism but also about purpose and meaning: finding and preserving the local tradition is the not-to-miss highlight.

One of the things that inspired Jariya was that many women in town, even educated women, either get stuck or feel so after their marriages. “We want to see successful women here; not necessarily in terms of what others may judge about your success, but what you feel about yourself. Our focus is on skill development of the artists in town, mostly based on handicrafts. There are very talented women and we hope to give them professional training so that later they can proceed on their own,” says Jariya. Surely, Abati is open to all interested girls, not restricting its service to Kayalpattinam and its community. Abati manages to bring professionally skilled trainers from nearby towns to facilitate workshops. “Increasing local productivity is a concern for us. We want our products to go outside and thus benefit the artists in the locality. We hope this effort would liberate and enable the women of the town to move forward a bit,” Jariya adds. As Abati receives orders from weddings and housewarmings, the commerce could also grow.

Over the years, Jariya has organized several workshops and meet-ups for the women of Kayalpattinam. ‘Meet2Wom’ was one such remarkable event where bonding and sharing were encouraged. Mostly, it was youngsters who turned up; but, to her surprise, three women of three generations came from a family and everyone profusely enjoyed it. They also conducted a debate on ‘Old Kayal versus New Kayal’, analyzing the subtle and invisible changes that the town and its inhabitants are through. Another thoughtfully planned series of workshops were called Fulfilling February: regular weekend training sessions in embroidery, calligraphy, watercolour painting, charcoal, henna design etc.

The consistent engagements with the young women of Kayalpattinam have given Jariya valuable sociological insights about her community: “Girls in Kayalpattinam are getting more exposure and sophistication than boys. In my experience, the girls’ attitude and values are far better evolved than of boys. We would like to bridge the gap between boys and girls in the town. Many divorces happen because of the stereotypical notions of gender roles and an utter lack of democracy in familial matters. This needs to be changed.” According to Jariya, like elsewhere, divorces are on a rise in Kayalpattinam because of the imbalances in the society, in gender equations. 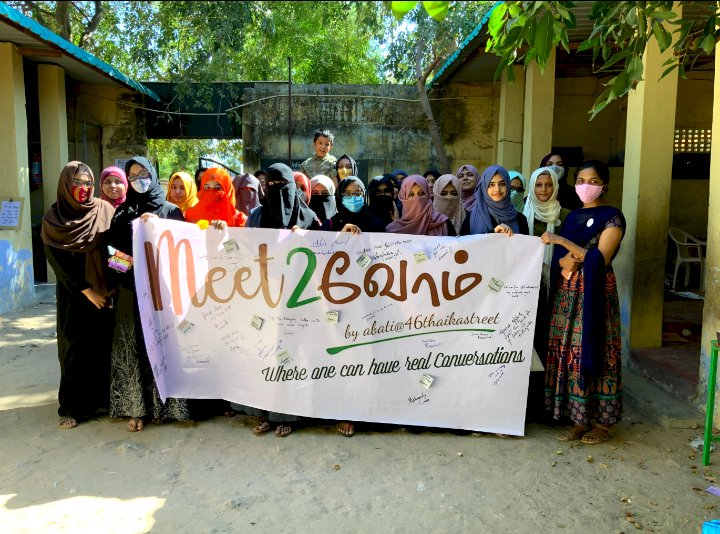 With an MBA in tourism management, Jariya always wanted to do something on her own. Her studies till graduation were in Chennai and post-graduation at Pondicherry University. However, she has been connected to her hometown and its rich legacies mainly through the stories her dad Abdul Azeez, a travel agent based in Chennai would share with her. He has been her deepest inspiration; the word Abati, meaning ‘my father’ in Arabic, is attributed to him though it could also be about the long lineage of the town’s Arab immigrant fathers, in a broader historic sense.

Jariya’s elder sister Afeera runs Abati Kitchen whose delicious cakes are famous in the town perhaps now more popular than the original shop. Their eldest sister Nasreen, a design engineer based in Dubai wholeheartedly supports Abati ventures. Jariya remembers, “my father was a great advocate of girls’ education. He sent my eldest sister to study engineering and practically supported co-education. This was a big influence in a traditional town like Kayalpattinam. As I was the youngest child, I spent a lot of time talking and listening to him; he would talk about so many things ranging from astronomy to local history. Some people even called him an over-thinker”. Her mother Safiya, a homemaker, is a strong pillar of support as well.

The Abati daughters have restored their family house in the vernacular architectural style of Kayalpattinam, retaining all traditional details like Thattikathavu (lit. knock door – an attached half-door to knock from the street as women can stand behind the actual door and check on the visitor) and Thalaivasal (main ceremonial entrance from the Mudukku or woman-only alleys between building rows). “We restored our house to remind the locals about the importance of heritage conservation. People have been mostly helpful and sympathetic to our efforts. Some families have given us precious antiques and ornaments.” Jariya’s collection is ever-growing and it could probably evolve into a fully-fledged museum, provided with more resources. 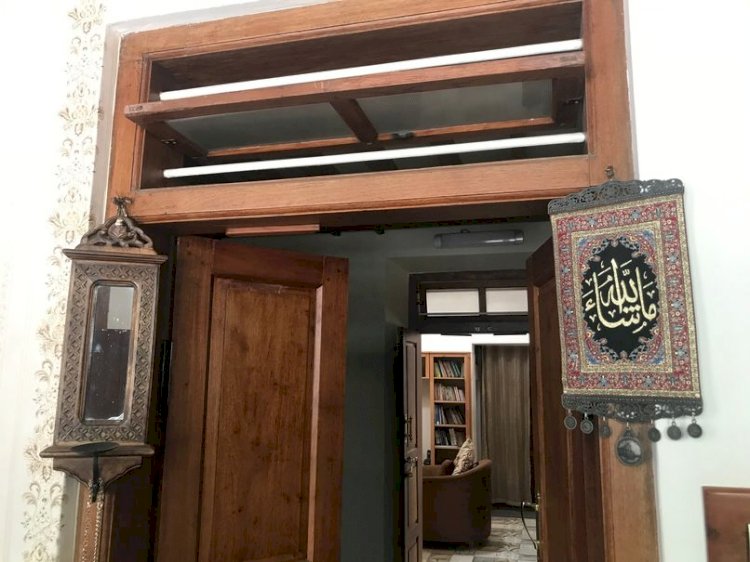 Abati has plans for conducting heritage walks, too. The new generation boys and girls who were brought up in other towns – as the Kayalpattinam trading community has expatriates in large numbers – lack a sense of belonging to their hometown, as Jariya feels. “During the lockdown I heard many people complaining, ‘oh we are stuck here!’ Getting stuck at your home could have been a beautiful thing. But, for many, their relationship with this town has become more formal now. It concerns me and we are thinking of ways to reconnect and make them proud of their heritage.”

However, the journey of Abati has not been a bed of roses. Jariya and her sisters faced challenges and still do. “We value the trust of the community as an important asset and when people are not convinced, it can be hurting. Also, we need to cultivate a certain level of professional discipline in our artists as we are committed to deliver quality products to our clients on time. We get all sorts of people – some lack skills, but are very enthusiastic. Some have skills, but are skeptical on different grounds.” Although Abati now focuses only on women, it is a matter of practical convenience. “In future, we may cater to our professional training to men as well. Our online programmes are open for all,” says Jariya. 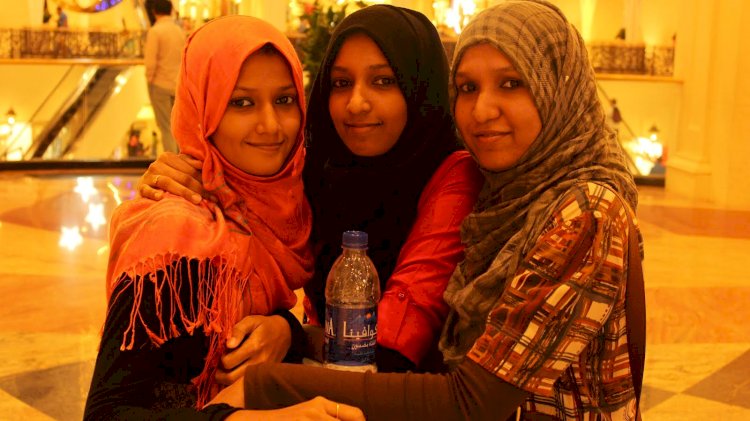 “We pay our artists, but it is not just about money; we attribute credits to artists and they get exposure. We make sure there is no exploitation a s well. Although we can’t pay a lot we hope they can stay with us and help us in our journey. We are also constantly searching for a way to sustain ourselves and provide them with better rewards for their hard work. Our artists have received offers from other organizations because of the work they did for us,” Jariya opens up regarding the dynamics of sustaining the venture.

Abati is also setting up a virtual library to encourage a more active reading culture in the town. The idea was mooted when they knew that one of the women kept a sizable personal library with good titles which she was ready to lend to those who want to read. So, the Abati team thought of identifying more such book collections and making a catalogue for readers. “That way, the book keepers can also get a small reward for their passion,” hopes Jariya. She thinks of reviving the old, historic Arabu-Tamil texts and has already worked on preserving local cuisine. It seems the Abati curator is never short of ideas; given the rich heritage of Kayalpattinam and the creative talents of the artists, this venture could grow bigger and impact the lives of the town in profound ways.

[This is the fifth part of a series on Kayalpattinam, which comes under a documentation project on influential Muslim cultural centres in India. You may read the previous chapters here.]