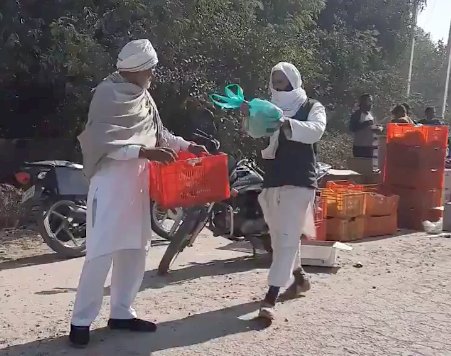 A protestor receiving food from a local Muslim resident in Delhi

As thousands of farmers entered the national capital after days of stand-off at the borders, mosques in Delhi are organising meals for them in what is called a humanitarian gesture. The good samaritans among Muslims on Saturday continued food distribution. And they have won the praises of social media by expressing solidarity to the fighting farmers and scripting a new tale of communal harmony in Delhi.

At least 25 mosques in Delhi are set to host the farmers for the night stay by opening their doors and arranging blankets, according to Nadeem Khan of the United Against Hate (UAH).

“Muslim brothers out there are making sure they do their bit to help farmers in the protest,” Japneet Singh tweeted sharing a video that shows a group of Delhi residents distributing banana, orange, biscuits, and chips to the farmers heading towards Delhi. 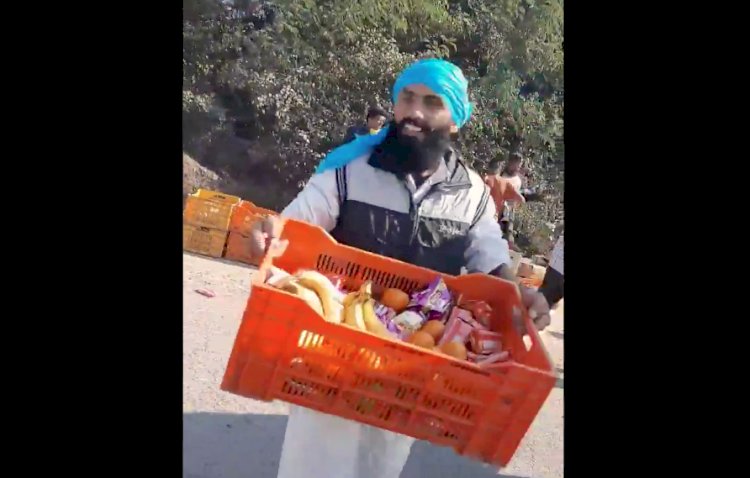 “Heirs of Pir Budhu Shah also in service,” another user (@iJobanRandhawa) tweeted referring to the historical association between the seventeenth-century Muslim saint Pir Budhu Shah and the tenth guru of Sikhism Guru Gobind Singh, which eventually lead to the former being murdered by the chief of Sadhaura Usman Khan for rendering assistance to Guru in the 1688 Battle of Bhangani.

The ‘langar sewa by Muslim brothers' is not for the first time. In September this year, the community kitchen set up by Muslims to feed the Sikh farmers protesting the new farm laws in Punjab’s Malerkotla town had created headlines.

During the protests against Citizenship Amendment Act (CAA) in December 2019, Sikh farmers from Punjab had come to New Delhi’s Shaheen Bagh to set up a similar food camp.

“We owe a debt to the Sikh community. They stood with us from Jamia to Shaheen Bagh,” Samia Mir Fatima (@_fatimaMir5) wrote on Twitter.

“Our mosques, houses, and hearts are wide open for the Sikh community,” tweeted another user.

The recipes for protest food often defy the rules of inter-dining.

Being the oldest form of sharing across communities, the idea of feeding is getting a boost during the protests as a kind gesture of solidarity while also strengthening communal fabric.

In an effort to promote the free market in the agriculture sector, the Modi administration passed the new farm bills in September. The new reforms loosen the rules around the sale, storage, and pricing of the produce and make it easier for farmers to sell their crops to private buyers. The government claims the private sector investments will stimulate growth. However, many farmers don’t subscribe to this view.

The protesting farmers were initially stopped by the police at the borders and had to get past tear gas and water cannons. In addition to barricades, cement barriers, shipping containers, and transport trucks the police had dug up the national highway to create ten-feet deep trenches.