Aurangzeb built a temple in UP, but Sangh won't acknowledge that 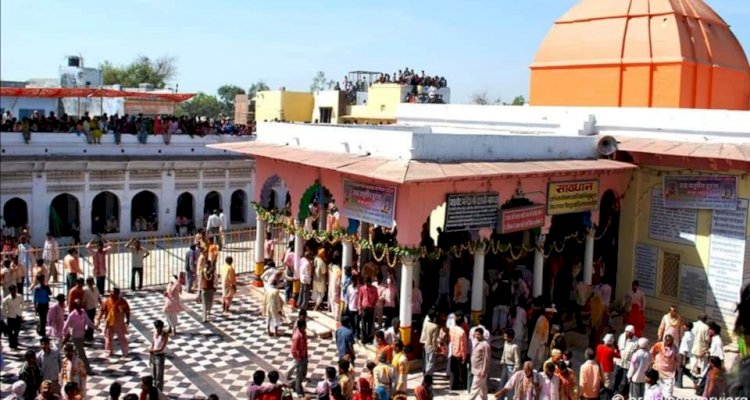 The issue of polarization has reached such levels that even symbolic gestures like offering prayers are enough for people to take offence. Recently, two Muslim youths offering prayer in a Mathura Temple premises caused an uproar which threw a limelight on some interesting facts about Dau Ji Maharaj Temple. The Mughal emperor Aurangzeb had endowed five villages to this Temple to meet the expenses of its maintenance. It was also Aurangzeb who ordered the construction of the Nakkhar-Khana temple. The presiding deity of this temple is Balram the elder brother of Shri Krishna. The famous Holi is played in the courtyard of this Temple.

The Mughal Era in Indian History is often targeted by Hindutva extremists. The focus of their target is the Mughal Emperor Aurangzeb. Since he ruled for the longest period, he is much criticized for his alleged rule in destroying the Hindu temples. There are many tales which are contradictory to the popular myth associated with him. Prof. Nadim Razavi of the Aligarh Muslim University's History Department says Aurangzeb was a ruler of a vast empire and had to take the decision as the situation demands. He deemed it necessary to raze temples at some places and endowed revenues to temples at other places.

Shri Daoji Maharaj Temple situated at Baldev Village, about 64 from Aligarh is one such temple which had five villages donated to it by Aurangzeb. The revenue generated by these five villages is still being donated for the upkeep of this Temple. The world-famous Baldeo Village known for its Huranga Holi is situated about 20 km North of Mathura.

Mathura is the birthplace of Lord Krishna and has the highest number of temples after Kashi.  Its numbers run into thousands. The religious centres of Vrindavan and Goverdhan are found here.  As per the Hindu religious belief, Lord Krishna is the incarnation of Lord Vishnu and is very much revered by Hindu devotees. Lord Krishna was born in a prison in Mathura where his maternal uncle Kans tried to kill him but he was saved by his father Vasudev.

Balram the elder sibling of Shri Krishna has helped him in his fight against injustice. He is also known as Baldeo and Shri Krishna fondly called him Daoji. His temple is located in a village in Mahavan Tehsil near Mathura. 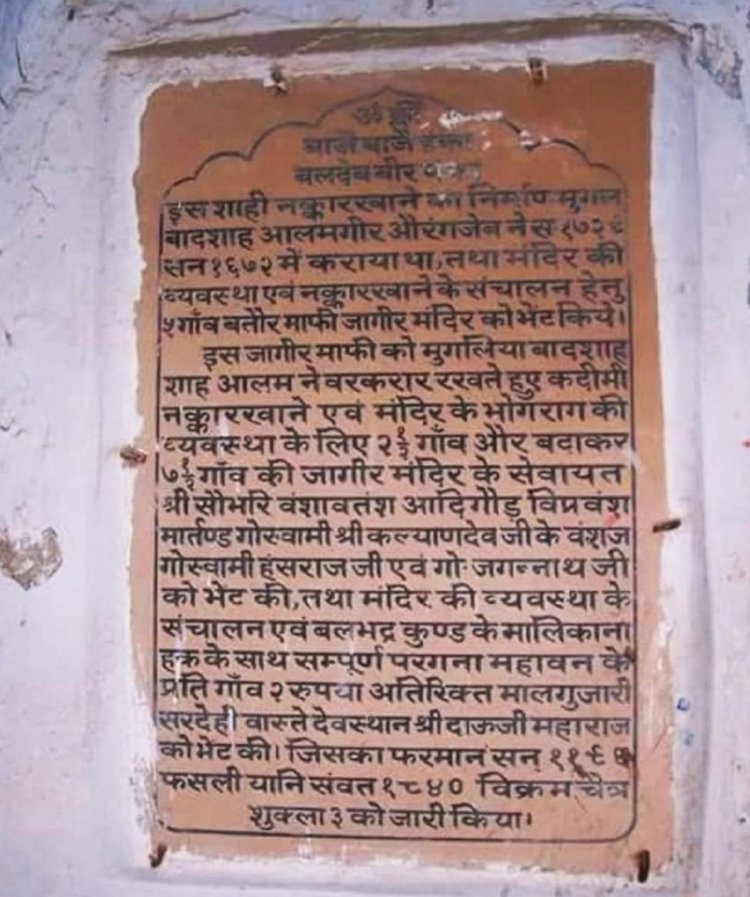 The Mughal Emperor Aurangzeb had donated five villages to this Temple.  The temples care-taker Anil Kumar Pandey said. The 580 acres of land was recorded in the name of Shri Daoji Maharaj revenue of which was used for the maintenance of the temple. Every inhabitant of Baldeo Towns 10 thousand population is aware of this historical fact.

Brajesh Kumar Pandey, another official of the temple's management, narrates a story known to all the Brijwasis related to this temple. He says At an occasion Aurangzeb was advancing towards Mathura demolishing temples in his way.  He knew about Baldeo Temple.  Whenever he asked his companion as to how far the temple is they replied that it is just about four miles away.  Even after hours, these companions were kept telling him the temple is just four miles away.  Aurangzeb felt it was some kind of miracle and hence gave up the idea of demolishing this temple. Rather, he assigned revenues of 5 villages to this Temple.

Prof. Nadim Razavi of AMU who is doing research on Aurangzeb's life and his Rule says Aurangzeb was not a communal ruler.  If he had been so, he would not have appointed Rajputs as the Governors of some of the important provinces while these provinces were exclusively run by the royal princes.  He was merely an emperor who knew how to run his empire.  He appeased Muslims at some places and Hindus at others.

Baldeo is also known for the famous Horanga Holi of Brij. A resident of the area, Vipin Garg explains that the Holi is played within the Courtyard of the temple by hundreds of Dewar Bhabhi.  Outside the main hall of the temple, there is a plaque stating the donation of five villages by Aurangzeb to this temple.  Aurangzeb had also built the main hall of the temple (naqqarkhana).  It is written here: The Mughal Emperor Alamgir Aurangzeb had built the Naqqarkhana of the temple in Samvat (Hindu Calendar) 1729 corresponding to 1672  and endowed tax exempted fiefdom (Jagir) of five villages to this temple for the maintenance of this Royal hall. 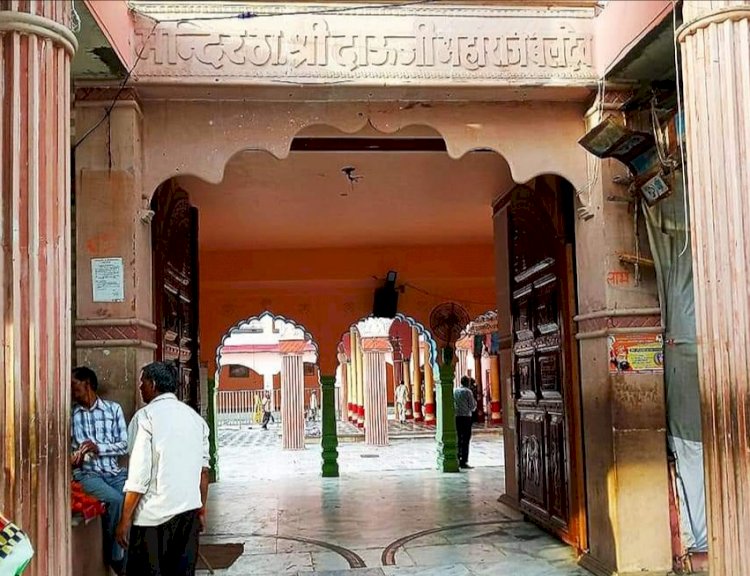 The later Mughal Emperor Shah Alam not only continued this tax exempted Jagir endowment of five villages but further added two and a half villages to render it seven and a half villages of fiefdom assigned to the Care-Taker Shri ShobhriVanshavantash Adigod Vipravansh Martand Goswami, a descendant of Shri Kalyan Dev, along with Goswami Hansraj Ji and Jagannath Ji.  Furthermore, along with the ownership rights of Balabhadra Kund, each village of Mahavan Tehsil was taxed Two Rupees extra for the maintenance and upkeep of Shri Daoji Maharaj Temple.  This was done through a Farman (Edict) issued in 1196 Fasli (Mughal Revenue Calendar) corresponding to Samvat (Hindu Calender)  year 1840 Vikram Chetra Shukl 3.

The Historian Razavi says that in addition to the above, Aurangzeb also donated to other temples of Kashi and Mathura.  He also continued the tradition began by earlier Mughal Emperors in donating to some other temples.

Though Pawan Pathak, the Tehsildar of Mahavan had not provided any document in this regard, the famous Historian Ghanshyam Pande of Mathura claims that there is irrefutable proof that Aurangzeb had donated to Shri Daoji Maharaj Temple tax-free fiefdom of five villages.  The Temples Receiver R.K. Pandey also corroborates this fact.  Currently, Aurangzeb's name plaque had been removed from the temple premises but it is kept safely due to maintenance work which is going on in Temples hall.  The plaque will be installed at its original site once the maintenance work is over.