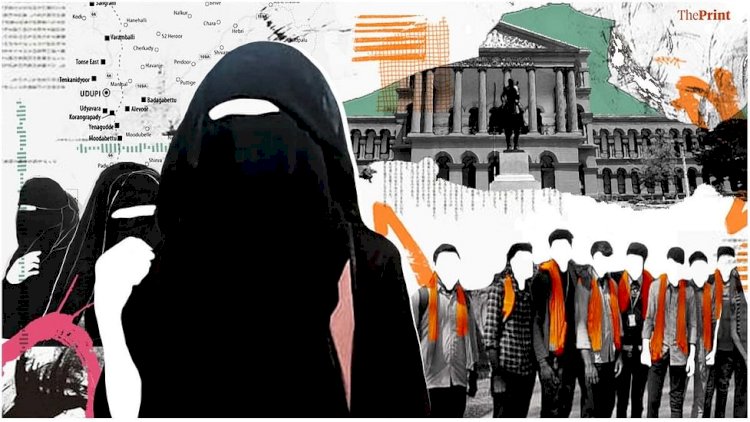 Recent Hijab row in Karnataka points to larger social malaise getting wider traction across India and that inadvertently might pose irreparable damage to the idea of nation guaranteed by constitution. Hijab row should be understood in wider perspective and to reduce it as a ‘scattered aberration by some fringe elements’ will be an exercise in futility.

Hijab row is a brazen continuation of alarming trend of hate attacks against minorities and Dalit communities with total impunity. The changing politics in the country after 2014 has ushered in assertive militant and masculine majoritarianism. Revenge politics espoused by Hindutva right wing political parties and cultural organizations are on spiral path with stoic silence of state apparatus pandering to the cause of growth of contempt.

Karnataka Hijab row is latest in strings of anti Muslim campaigns. CAA protests precipitated identity crisis among the beleaguered Muslims. It follows after misogynistic episodes of ‘Sulli Deals’ and ‘Bulli Bai’ and hate mongering Haridwar Dharma Sansad. Even the Triple Talaq Bill has produced counter result as Muslims are opposing reforms due to fear of abrogation of personal law to bring uniformity at the cost of famed Indian diversity.

Karnataka has long become a laboratory for BJP to test waters to make frontal gush to other south Indian states. Besides Goa, nowhere else in south India BJP has failed to grow into credible electoral power and hence every development in Karnataka would have wider ripple effects across the region. The domino effects are already palpable with various BJP ruled states contemplating appropriate acts on Hijab in educational institutions.

Dietary preferences were attacked earlier as violent mob lynching claimed several lives. The freedom to hold Friday congregation prayers was infringed. The compromise deal in Babari Masjid verdict rendered the existence of Muslims more tenuous. These attacks should not be misjudged squarely as attacks on one community long accused of being generous recipient of appeasement politics. When the rights to honorable existence and religious freedom are trampled upon the first causalities are the idea of ‘Indianess’ espoused by the framers of constitution and the exquisiteness of religious pluralism. It will be naturally ensued by tottering trust in the idea of inclusive nationhood and invariably precipitate communal discords.

In Karnataka, when Muslim women are heckled and restricted  from entry it is gross violation of Article 21 A which promises Right to Education. Because of Muslim women are the late entrants to higher education, the denial of education to them will aggravate backwardness among the community. BJP, often projects itself as the liberator of Muslim women by legislating Triple Talaq Bill, should ensure the seamless education of Muslim women adhering to their religious choices.

The issue is not whether Hijab is part of ‘essential practices’, protected under Article 25, but the perplexing question of what happened to the religious tolerance of the country. Today it is about Hijab; yesterday it was about beef, Christmas celebration and public performance of Friday prayers among others. Tomorrow more thorns will arguably crop up. The moot question is how come all religious symbols of minority communities subjected to torrential attacks by Hindutva forces and why governments are shielding the perpetrators of desecration against the lofty principles of constitution.

Understanding the anatomy of recent Hindutva attacks will offer answers and solutions to reduce communal frictions. It is falsely believed by Hindutva activists that the minorities in the country had misappropriated the benefits from the inception of independent nation at the expense of majority community. The alleged electoral vote consolidation helped them amass asymmetrical benefits whereas Hindu rights were junked by political leadership. They also highlight the special protections enjoyed by minority communities under Article 29 and 30.

Hindutva proponents advocate staunch ‘Hindu Garv’ (Hindu pride) politics to ‘avenge historic injustices’. There has no constitutional and communal barriers of being organized along religious affiliations and it is welcomed by Ambedkar to institutionalize democracy. But the problems arise, when they use violence and majoritarianism to achieve their ends. When the Hindutva interests are advocated with crass contempt of constitution, it causes flashpoints. The total impunity from laws enjoyed by the miscreant lends credence to the subjugation of secular and democratic rights to majoritarian demands. When Hindutva demands prohibition of Hijabs in the schools, it is the flawed assertion that the majority will determine the right of others.

Minorities, especially Muslims, being obese legatees of appeasement politics is factually wrong. Sachar Committee Report brought out the embarrassing backwardness of Muslims. Hilal Ahmed in his ‘Siyasi Muslims’ has statistically busted the myths of Muslim electoral consolidation. Hindutva situates minorities in the dock to pursue their electoral ends. Majoritarian interpretation of Indian constitution will jeopardize the cause of minorities. The experiment of India is and will be success when it honors the rights of all with compassion and demands of religious freedom.

The attack on Hijab is the manifestation of rising intolerance in the country. It is attack on identity of Muslims; a citizen’s right to live with freedom. As long as one willingly dons Hijab any attack on it is brazen violation of individual freedom. The idea of justice intrinsically includes respect for others. Callous atmosphere of intolerance will breed more violence undermining peace.

Serious attempts should be made by governments and civil societies to stem the tide of intolerance and promote the idea of mutual existence. Governments at centre and states have to adopt stern actions against the merchants of hate. Any compromise from the law enforcement agencies will buoy the hate campaigns. Judiciary should take preemptive attitude to settle communal flares from blowing out of proportions. Tolerance as a virtue and secular right has to be inculcated in society.