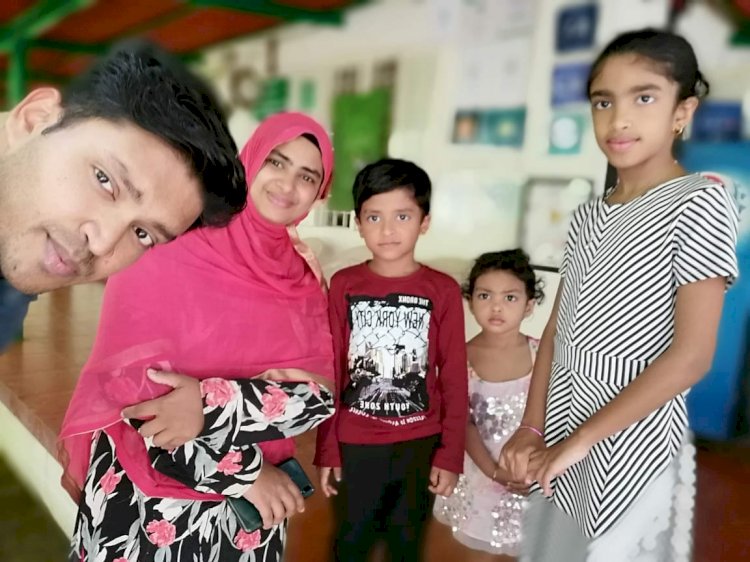 At a time when the world has turned online for education, work, shopping, business and whatnot, here is a couple from Malappuram district in Kerala who has brought out a new online method of learning, integrating computer coding with school subjects for kids. Let’s meet Aisha Sameeha and Shahid Jabbar from Nilambur.

Hailing from the village of Melattur, Aisha Sameeha was just one among the many girls in Malappuram - who studied well, graduated in BTech, got married and settled with her husband in his workplace Dubai. Soon, they got their first child and Sameeha got busy with her daughter Eshal. However, sitting idle or being content with the homely chores alone was not her cup of tea. Sameeha tried her hand at different trades such as content writing for technical websites, cooking and baking, stitching and embroidery etc. She also attended and won a few cooking competitions held in Kerala and Dubai.

Into the field of education

Having born and brought up in Kerala and abroad, Sameeha had got familiarized with different methods of education. And that encouraged her interest in learning and teaching. “Teaching has always been my passion, even when doing BTech. And that is also a reason I didn’t take up the job offers that came my way after the completion of my studies,” said Sameeha. She especially mentioned the methods followed in the PeeVeeS Public School, Nilambur, where she studied from class 1 to 6 and the MES Engineering College. The two institutions taught her the importance of encouragement by teachers and the effectiveness of grouping and sharing to learn better.

Once her daughter began to attend school, it opened her to another world in the field of education. The kindergarten that Eshal attended in Dubai followed the Reggio Emilia approach, which gave high importance to interaction between parents, teachers and students. Parents were encouraged to come to the school and be a part of various activities. Each class had a library and several other items that caught children’s attention and interest, where they could gain knowledge. “I had thought that I couldn’t manage small kids, but it was proved wrong when I began to go there,” confessed Sameeha. “I used to observe how they were doing things, dealing with the children, the method of teaching etc. That was a sort of experimental and experiential learning. Eshal liked it a lot there.”

Sameeha gave tuition classes to neighbouring children in Dubai and continued it after coming back to Kerala, beginning with two children which grew to 18 by the end of the year. This made her confident in teaching. Her dream to teach had now grown to begin a school; she wanted to do something different. She did the one-year online PG Diploma in International Montessori Teachers Training Course conducted by the National Child Development Council. “It was very helpful to know the psychology of children. If nothing else, it helps us understand and deal with our kids better,” she said.

Towards a Coding course for kids

Nearly 10 years since completing BTech in Computer Science, she casually went through the course and syllabus one day to astonishingly finding that the subject had undergone a sea change and that it was so very advanced and far easier to teach and learn. This prompted her to think of a way to teach it to kids. Her search for such an existing course didn’t bear fruit, so she began working on one on her own - a course of computer coding for kids, for which her daughter was the first to try on. When she found it effective and useful, she introduced it as a school activity in her alma mater PeeVeeS Public School, where she and husband had studied, where her children were studying now. The encouraging principal got ready to give her an opportunity for trial and would see ‘how it went’. In November 2019, Sameeha began to handle classes once a week in the PeeVeeS Public School and the PeeVeeS Residential School each.

The course for the tiny kindergarten children did not directly teach them coding but was mainly pre-coding activities. The classes were held in a hall and kids were grouped into teams of five, in which roles were shared by all members. In the various games and activities, the kids acted as per their understanding and conceptions, and they became computer and programmers. The recorded sessions were reviewed by the principal and senior teachers, who liked the method of teaching. Thus the classes continued till February end when Sameeha had to take leave for a few days. And by the time she was back, schools were closed down due to the CoVid-19 lockdown. However, she is continuing the course in the Kindergarten of the PeeVeeS Public School with more than 200 students, though online and with its constraints.

Sameeha was one among the 63 selected for the Teachers Innovation Award instituted by the Sri Aurobindo Society, an NGO based in Pondicherry, in January 2020. The award, which recognizes unique and novel ideas and innovations in the field of education, was earlier given only to teachers of government schools but is presented to others also related to the field of education since 2019. The award was presented in March 2020 by the central Minister of Human Resources at a function held in the national capital.

Till this time, Sameeha was venturing alone, though with the support and cooperation of her husband Shahid Jabbar who was working as Business Consultant in Dubai. In February end, he came to India and couldn’t go back due to the CoVid-19 lockdown and cancellation of international flights. Graduate in MBA in International Business and Marketing from London, Shahid decided to stay back in his hometown Nilambur and move the project forward.

The couple registered ‘Koderfin’ by mid-March and got good encouragement from the Kerala Startup Mission and the Startup India. “‘Koder’ refers to one who codes. ‘Fin’ refers to ‘Future Is Now’ as well as the fin of aeroplanes that help them propel forward,” explained Shahid who propounded the name. Sameeha is the founder and creates the content for the course and website, while Shahid is the CEO and handles the website (www.koderfin.com), branding, videos etc. Koderfin was listed among the final 9 Edu-tech startups in the Big Demo Day 2.0 of the ‘Business 4 Startups’ organized by the Kerala Startup Mission in August 2020. The Koderfin soon got official acknowledgement to be introduced and practised in schools. The couple also presented the Koderfin and its curriculum at the "Matchmaking with Germany 2020", an initiative by the German Federal Ministry for Economic Affairs and Energy, which was a 5-day digital business match-making event in the field of education and training for the target market India held in October-November 2020.

Shahid and Sameeha had planned to begin the online course later only, after the course in schools became successful. But the unprecedented situations due to the virus outbreak forced them to begin it earlier. However, since all educational institutions had begun to hold classes online by then, they didn’t have to introduce the online course as a new method. The changed situations also made it easier to introduce coding, as everything is on computer and online now.

The online coding course was launched in July, and by November there are more than 100 students of various ages (between 3.5 and 16 years old), hailing from different parts of the country and abroad, including a few students of other nationalities. It is not only coding that the online classes provide. “We are providing tuition classes in school subjects, tuition for those with learning disabilities, spoken English classes for Arab students, etc. Essential skills training is also a part of the course we provide,” said Sameeha and Shahid.

The course runs as per the ‘Ai-share’ pedagogy which includes Artificial Intelligence, science, history, arithmetic-art, research, and English and engineering– a curriculum named after ‘Aisha and Shahid’, for which Koderfin has the patent and which integrates coding into the existing school curriculum, including the pre-school. “The coding course that the Koderfin provides is an ongoing one, which is highly dependent on each child and how he/she grasps things,” says Sameeha. Seven teachers work for Koderfin now, most of who deal with the subject tuitions while Sameeha handles the coding classes. The couple added that Koderfin could employ as teachers those who are educationally qualified yet not working and who have a flair for teaching, and handling online classes, hinting towards the large number of women who would suit the criteria in Kerala.

Shahid explained the three business models that the Koderfin is following now as well as planning in the future. In the first model, the company provides an affordable course to schools and educational institutions, which is now being practised in the PeeVeeS Public School and others. In the second one, online courses are offered to interested students directly, which has group and individual classes according to need. The third model, which is now only a vision aims at providing the course to a large volume of students in association with government schools. However, the couple is planning an organic growth for the company, without jumping on to huge investments.

Initially, those in the family didn’t know what the BTech graduate Sameeha was doing holding tuition classes at home for school students. But when the number of students increased from two to 18, they understood the teacher in her. The same hesitancy worked when she began the coding project too, however now they were confident that she was up to something. She especially mentioned her father-in-law, who designed and made the tools for the pre-coding activities to be provided at the schools. Those in the extended family like maternal great uncle PV Abdul Vahab (former Member of Parliament) helped the couple get into contact with several people, who helped, guided and supported them to move forward in the initial stage itself.

Some students who joined at the beginning of the online course itself are creating their apps now, a few of which have been uploaded on the Facebook page of the Koderfin (https://fb.watch/20RKdlaO2i/). Some others are into logo-making, blogging etc, ‘with the exposure and opportunity provided by Koderfin’, says Sameeha.

She especially mentioned the change the course brought in her daughter Eshal, from who began everything. The 9-year old girl has created a few apps of her own (https://fb.watch/20SxyRaOfW/). “She also creates content for the classes of smaller children, when I am busy with those of the older students,” said the exuberant Sameeha, who is planning on introducing the course to her two smaller children too when the time comes.